Meisterstück side-by-side shotguns are light and wonderfully elegant hunting guns; fine representatives of the good old days. The side-by-side arrangement of the barrels is a classical design principle of hunting guns – this principle has been applied in Suhl since the early days. Even if the Merkel brothers were more committed to the over-and-under gun at the start, the Merkel philosophy was soon devolved to the traditional side-by-side gun. An example of this is the aesthetic line of the slim soldered barrels – a trademark of Merkel Meisterstücks.

Whether with Anson & Deeley locks or sidelocks, the Suhl shotguns soon developed their own style and cleverly improvised on the existing systems and solutions.

Besides the classical barrel hook, Suhl soon adopted the cross bolt developed by William Greener – which represented gunmaking at its finest.

Merkel maintains the elegance and optical lightness of these shotguns by consistent adherence to traditions. The individually adapted receivers also play a role. Three different receivers are manufactured for the three calibres on offer – calibre-adapted. This keeps the receivers slim and the guns light and responsive. With the shotguns too, steel is interlocked against steel and the Merkel top-down principle is applied. Thus the receiver of a side-by-side shotgun is constructed in such a way that it can withstand the same gas pressure as a Safari rifle. 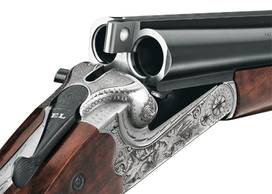 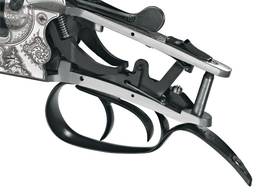